The “NEW/NOW” art gallery hit the Philbrook’s downtown location and remains until March 3. Each art piece comes from the Tulsa Arts Fellowship. Everyone in Tulsa should spend an hour there; it’s a must-see.
I enjoyed the inventive use of space in some of the pieces. “String Theory” by Codak Smith had color, balance and texture. The three-dimensional effect of the strings running up and down the piece gave a new layer to the art.

Another interesting use of space that caught my eye was a piece called “dreams and bones” (stylized) by Rena Detrixhe. It looked like a campfire but with paper mache antler-like bones instead of sticks. It was lying in the middle of the room on the floor, almost as if it were more part of the museum than its on art piece.

One of the most eye-catching exhibits was “Sanguine Flow” by Rachel Hayes. It was made from twine and tulle. It flowed across the wall from it was mounted in such a way that I thought it was actually moving, bursting with color.
The Native American art maintained a powerful presence throughout the experience. A piece called “Ho-Kee-Ma Bigknife” by Adam Carnes captured an indigenous man posing. It was beautiful. I savored every detail of him: his colors, the feathers he was wearing, his face paint, his costume and even the tiny cigarette he was holding.
“All That We Wear” by Anita Fields had three clear-material shirts hanging from strings. There were see-through and floating, which reminded me of ghost-dance shirts from Native protests.
Moving to social commentary, a piece called “Battle Jacket” by Emily M. Chase was one of my personal favorites. Made from paper, it somehow looked like a leather biker jacket. The description said it also had freshwater pearls and Swarovski crystals. It was oddly thrilling to see something so dark and powerful include things so beautiful. It embodied feminism in a time where the world needs that jacket.
Next to it was a piece by the same artist, called “Stress Fracture.” It was another white-paper shirt hanging from a string. A couple black birds were bursting out of the back, and one lay on the ground behind him. Anyone should interpret this one for themselves. 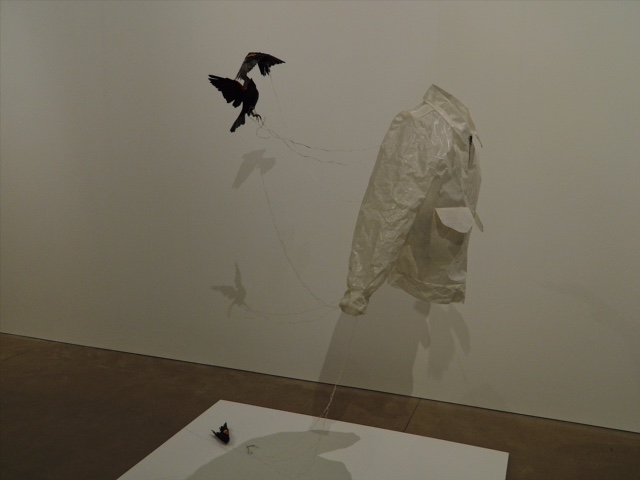 Another piece that caught my eye was “Ephemeral Propinquity” by Jave Yoshimoto. It was carved into wood with laser. It had quite a bit going on, including Godzilla in the background. The attention to detail was incredible, even if it was done by a laser.
The gallery also made use of the staircase that goes upstairs. Next to it was a box of sharpies and sticky notes. It invited visitors to write a goal they have for themselves on a note and stick it to the staircase wall. The sign also said visitors could take a note too. I left one myself. Maybe someone will pick it up.
The “NEW/NOW” exhibition features contemporary work created in Tulsa and runs until March 3.

Best brownies in Tulsa? That's only the beginning for Lambrusco'z Deli. Tulsa has long been the nation’s guinea pig when it comes to...

On Saturday night, the University of Tulsa hosted their annual international extravaganza for the campus, called the International Night...

“The Need” to be more than a thriller novel

It’s not often that I purchase a book solely because of the cover. I recently made an exception to this rule when I saw Helen Phillip’s...