TU now has a club dedicated to Quidditch, the popular sport of the wizarding world from the Harry Potter franchise. For muggles perhaps not familiar with the wizarding world’s most popular sport, the Collegian interviewed Oliver Wood, captain of the Gryffindor Quidditch team at Hogwarts from 1990–1994 and a professional Quidditch player. He said the sport is “easy enough to understand. Each team has seven players: three Chasers, two Beaters, one Keeper, and a Seeker.” All of the players ride flying broomsticks during the game.

Besides the players, there are also “three kinds of balls,” but four total. The largest is the Quaffle. The Chasers try to throw the Quaffle through one of three hoops on the opposing team’s side of the field. Doing so awards their team ten points. The Keeper is basically a goalie, defending the hoops. The second type of ball are the Bludgers, of which there are two. Wood described them as “nasty little buggers.” The Bludgers are bewitched to fly by themselves and to hit players, which can knock players from their brooms and even result in injury. The two Beaters wield bats in order to keep the Bludgers away from their fellow team mates.

The final ball is the Golden Snitch. It is a metallic, gold-colored ball about the size of a golf ball. It also has wings that enable it to fly. Each team’s Seeker tries to catch the Golden Snitch. The game ends when one of the Seekers succeeds in catching it. That team is then awarded 150 points. The team with the highest number of points wins. 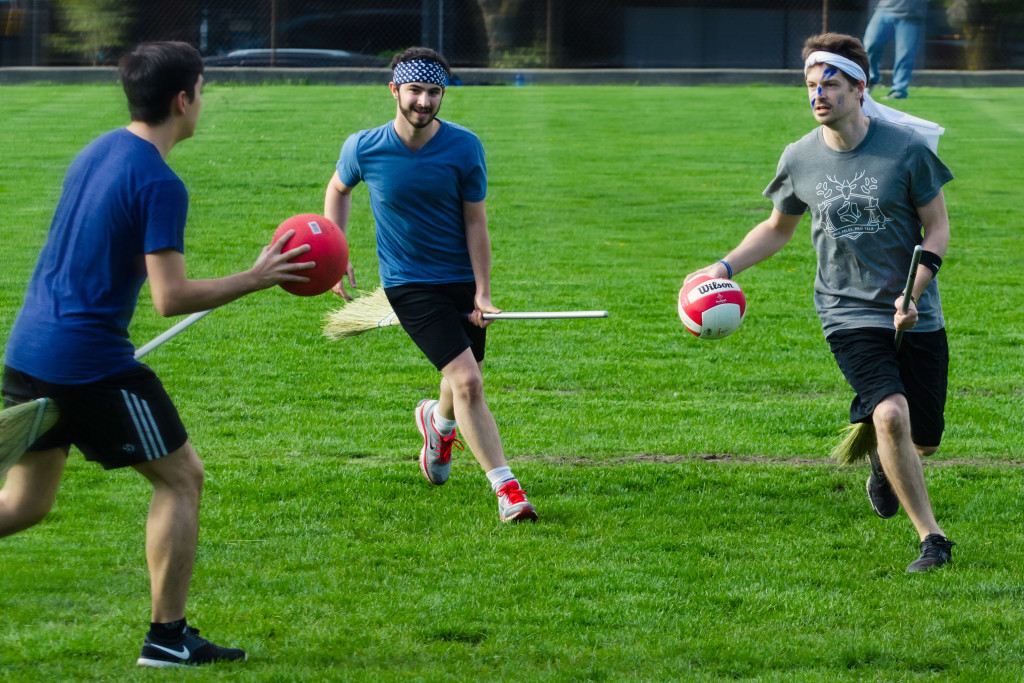 However, since most of TU’s student body is composed of muggles who are unable to fly on a broom, Tulsa Quidditch has made a few adaptations. Co-captain Haley Anderson described the changes to the Collegian. Players will still have to play with something between their legs. This can range from a broomstick to a pool noodle. A volleyball will be used in the place of an actual Quaffle. The Chasers will still be throwing it through custom-made hoops, though.

The other positions have more modifications. The Beaters will use dodgeballs in the place of Bludgers. However, they will not use bats; they’ll just throw them at other players. If a player is hit by a “Bludger,” he’ll have to run around a part of the field. The Golden Snitch will be a tennis ball in pantyhose that will be attached to someone’s waist. The Seekers will have to chase that person and take the ball.

Anderson also said that the club is hoping to have more regional scrimmages against teams from other colleges. It is also possible to have international competitions if the team is good enough.

Besides playing Quidditch, the new club is also hoping to have other Harry Potter related events, particularly during the winter. Any student who is interested in taking part in Tulsa Quidditch should contact Haley Anderson at haley-anderson@utulsa.edu.

The House Ethics Committee has opened an investigation against Florida representative Matt Gaetz for his involvement with Joel Greenberg,...

Despite coming under fire for allegations of poor treatment of employees, Alabama Amazon employees recently voted against forming a union....

Following his inauguration on Jan. 20, President Joe Biden started to assemble the most diverse Cabinet in United States history. The...

This past week, there was a major disruption to international shipping. The cargo ship the Ever Given became stuck in the Suez Canal,...

The Centers for Disease Control and Prevention (CDC) recently changed the social distancing guidelines for K-12 schools to recommend that...